Three awards are given by the DCA for some of the best articles published in Dinghy Cruising each year:In the lists of winners below, the location of each of the winning articles is given as follows: Journal No./Page No.
The Editor's Burgee
This award began in 2010 and is given by the Editor for the most interesting and entertaining rally report of the year. 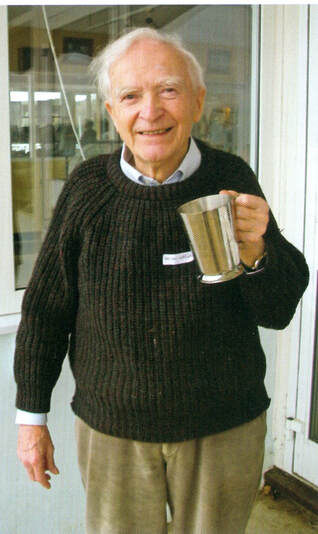 Brian Naylor holding the 'Noggin'
The Naylor Noggin
Brain Naylor made his mark on the DCA soon after the Association was formed by sailing Emma, his 16ft 10ins 'dinghy with a lid', all the way from Bradwell-on-Sea in Essex to the Folly Inn on the River Medina above Cowes on the Isle of Wight, to attend the first-ever DCA rally. His love of adventurous cruising in dinghies led him to suggest that a modest trophy might be awarded annually for the best log of a cruise published in the Bulletin (now Dinghy Cruising).

Brian's guidance for awarding his trophy is as follows:
Here is a list of recent winners with the title of their winning logs and their location in Dinghy Cruising:

Here is a list of the earlier winners of the Noggin and where the reports can be found.
​The Naylor Noggin Folder: A Celebration of the Years of Dinghy Cruising Accounts
After Paul Constantine won the Noggin in 2003 he decided to put together a folder celebrating the winning cruise accounts. It contains a comprehensive introduction to the Award, Brian Naylor's full cruise accounts, and thumbnail sketches of all the other winning cruise accounts up to 2012. Paul's outlines enable you to appreciate the diversity of cruises that DCA members have undertaken and in many cases make you want to read the original winning accounts. This you can do if you have past copies of the Journals or the CD which contains back copies of the Journal from their inception to 2017 or you can also borrow back copies of the Journal from the DCA LIbrary. To download a copy of the folder please go to the DCA Library page.
Our current Technical Adviser, Dave Jennings, explains what he looks for when choosing the winners: Here is a list of those who have won the Peter Bick Cup or Peter's Pint:
2020    Rob Stracey for his article Galadriel Completed in  DC 246/62
2018/9  Bill Haylock for his article Learning to Love Lofting or the Joy of Boatbuilding from Scratch in DC 239/61
2017  No award
2016  Andrew Dawson for his article Sectioning a British Seagull Outboard Motor in DC 230/58
2015  John Perry for his article Our Third Boat Trailer in DC 228/56
2014  Chris Waite for his article Having a Hunch in DC 222/26
2013  Roy Downes for his article Hoisting the Lugsail into the 21st Century in DC 219/36
2012  Paul Constantine for his article Reefing the Sliding-Gunter Main in DC 217/52
2011  No award
2010  David Sumner for his article Gaff-Rigged Mirror in DC 208/34
2009  Keith Muscott for his article The Rise of the Microboat in DC 206/48
2008  Roger Barnes for his series on The Seagoing Dinghy in DC 198/21,199/25, 200/35, 202/34
2007  Cliff Martin for his article Comfort on a Dinghy Cruise in DC 195/32
2006  David Platten for his article No-Sweat Dinghy Launching in DC 191/56
2005  Mike Jackson for his article Topper Cruz Tiller Modification in DC 187/44
2004  Keith Muscott for his article on Man Overboard Procedures in DC 185/34
2003  Cedric Jones  for his article Building a Hollow Mast in DC 178/30 & 179/22